The Data Inside a Cable

You’re at your PC and you type “Hello World”. This gets converted into binary which is a number system comprising of only 1s and 0s. Example:

No one really touches or manipulates this translation process, its age old and rock solid. It’s called the atomic structure of information. 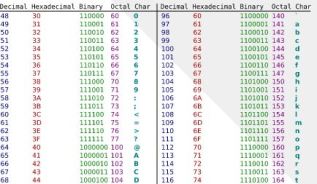 Why ones and zeroes? Cause it’s the simplest way to communicate. Like the name says, it’s binary, yes or no, true or false. You start from there and add it up to something complex.

Once you convert that text into ones and zeroes, you have essentially converted it onto the smallest piece of information, called a “bit”. Before we talk about electricity think about Morse Code. One Beep, Two Beeps, One Beep in a given period is the way one party conveys a sequence of taps to another, who then rebuilds it into a message. With that in mind, you do the same for electrical communication, using transistors.

Electronic devices like your PC has something called a transistor, which are silicon semi-conductors (does not conduct but feels electricity). These transistors can send/read electrical pulses or signals. So with the morse code example in mind,  that “Hello World” text is converted into ones and zeroes and instead of taps, pulses are sent over an electrical cable to the receiving party which listens for a given period and then creates the Hello World message on the other end.

Ever bought a TV and they say the resolution is 4000 pixels or remember setting the resolution on your desktop PC to 800 by 600? That’s the number of pixels on the screen, little dots that make up the image you are viewing. Each of these dots has a color specification typically a combination of red, green and blue (RBG) example; Red 217, Green 60, Blue 172.

With more transistors, you can send a lot more bits at a time, with 8 you can send 8 bits (1 byte) which can represent a binary sequence of numbers up to 255, with 32 it becomes 4.2 billion. Note that 1000 bytes make a kilobyte, 1024 kilobytes make a megabyte. If a song is 3 megabytes, that makes 24 million bits that need to be transferred.

How is Data Sent Over Light

The LAN cables carrying this data between your PC and a router is great for a short distance, but if you’re sending data from Singapore to Germany, it needs to be way faster. This is where light comes in to the picture, specifically Fiber Optic cables. Check out this article on submarine cables.

Fibre Optic cables are essentially highly reflective cables, mirror-like, which you can send a light beam through and it bounces about the cable before reaching the other end. When you send a beam of light, what you are doing is sending a signal that is binary, its 1 or 0, light or dark. The logic is the same, the other party listens, builds that data and it becomes easily readable. And in a single cable, you can send several different beams which bounce around the cable and comes out the other end.

So that, at a very high level, describes how data is sent over cables (electrical and optical). It is the same for wireless, the binary data is converted into radio waves and beamed out to a router, which then does the digital translation, and sends the data the cable way to the router the other end which then converts the signal into radio wave, wirelessly to you.